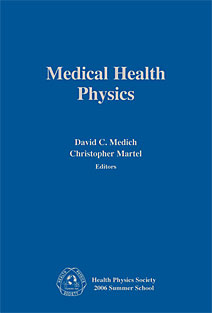 This book was written by a credible and outstanding committee, made up of members who are unquestionably experts in the field of health physics. It consists of 18 easy-to-read chapters with short summaries and references provided at the end of each chapter. It was prepared for the 2006 Health Physics Society Summer School. It provides concise, practical, and fundamental information to health physicists at all levels of expertise. It encompasses a broad spectrum of radiation safety protocols and technologies. The topics for this book not only prepared the students for the competencies in health physics but also suggested effective health physics training programs in the hospital setting.


The role of the health physicist in human biomedical research is discussed with great detail and emphasizes the importance role of the Institutional Review Board relating to the rights and confidentiality of human subjects involved in clinical research regulated by the Food and Drug Administration (FDA).

It continues with radioactive waste management on-site and off-site programs to dispose or store radioactive materials with half-lives less than 30, 60, 90, and 120 days. The appendix recommends guidelines about medical licenses waste disposal, decay in storage (DIS), disposal of liquids in sanitary sewerage, incineration of waste, and waste compaction. Several states and federal agencies such as the U.S. NRC were regulating the medical misadministration of the use of radiation in clinical settings. Practical examples addressing the misadministration of sealed and unsealed radioactivity are highlighted, followed by a short discussion addressing the cause of these problems.

The book was designed to serve the interest of radiation safety officers. It addresses the details of practicing health physics in various clinical settings. It centers our attention on the institutional safety aspects for laser systems. In particular, it outlines the physics of lasers and the biological effects of lasers. It then shifts its interest toward personal encounters and compliance issues with regulators and inspectors. A table of violations and corrective actions taken is included to emphasize the essentials of following the rules and regulations at state and federal levels.

At the end of the book, several examples of forms and reports are listed, such as quality assurance for medical uses of radiation, examples of laboratory inspection checklists, and an example application for authorization to use radioactive materials (Non-Human Use).

I suggest the book should have a glossary and index, which would be useful to the readers.

Overall, the book has proven to be valuable to medical physicists who are practicing or contemplating a career in the field of health physics. It is a great reference and a must-have book.