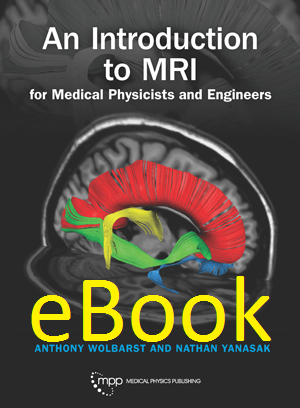 An Introduction to MRI for Medical Physicists and Engineers

“AN INTRODUCTION TO MRI FOR MEDICAL PHYSICISTS AND ENGINEERS”

Abstract: This article is a brief review of the textbook “An Introduction to MRI for Medical Physicists and Engineers” by Anthony Wolbarst and Nathan Yanasak, 2019, Medical Physics Publishing, ISBN-13 978 1 930524 20 0

“An Introduction to MRI for Medical Physicists and Engineers” is a comprehensive presentation of MRI fundamentals -- beginning with the simplest NMR concepts and building ultimately to thorough descriptions of many of today’s most widely-used clinical MRI algorithms and technologies. Conceptual explanations are presented along with their fundamental mathematical underpinnings in a way that is understandable and engaging for the reader. Throughout the book, simplified quasi-quantum mechanical (QM) explanations of protons in spin-up and spin-down states are logically woven together with the more rigorous and powerful classical physics (pulsed energy) view of NMR. Numerous clear diagrams and tables are provided to illustrate key topics, and helpful exercises are included in each chapter. Interesting historical developments and examples of MRI’s clinical utility are also sprinkled throughout, helping the reader anchor abstract physics concepts to practical imaging implementations. Though the book is intended for the biomedical engineer or medical physicist in training, the content is comprehensive enough that practicing medical physicists and imaging instructors will also find it useful to enhance their own understanding of MRI.

The book is organized as follows:

Chapter one introduces the fundamental concepts of a nuclear spin magnetic moment, the gyromagnetic ratio, the quasi-QM notion of a proton’s spin-up and spin-down states when placed in a magnetic field, the Larmor frequency and resultant energy necessary to flip a proton’s spin, nuclear magnetic resonance (NMR), the spatial encoding of different voxels via a gradient magnetic field, the classical presentation of a voxel’s net magnetization precessing in the plane normal to the external magnetic field, as well as the “T1” and “T2” spin-relaxation mechanisms of a nucleus with its local microenvironment – i.e., the interactions of protons in water and lipids with the nearby biomolecules that exist within and between cells --that create the exceptional soft-tissue contrast for which MRI is renowned.

Chapter two provides a helpful overview of electromagnetism, including Maxwell’s equations; magnetic susceptibility (diamagnetism, paramagnetism, and ferromagnetism); proton-proton dipole interactions; NMR at the Larmor frequency; and a simple demonstration of NMR in water. The final pages address the differences between a simplified QM treatment and a classical treatment of NMR in a manner that illustrates how the same phenomenon can be viewed through each physics lens.

Chapter four presents the origins of net voxel magnetization. Thermal equilibrium, and the constant battle between entropy and energy in a system, are explained. The Boltzmann distribution is introduced to describe the population statistics of spin-up and spin-down protons at thermal equilibrium. This leads to a discussion of the resultant impact of MRI magnet strength B0 on net voxel magnetization, and therefore image quality. Stimulated radiative spin transitions brought on by EM waves at the Larmor frequency which drive the system away from thermal equilibrium, and non-radiative spin transitions -- including T1 relaxation --which return the system to equilibrium, are also introduced.

Chapter five extensively reviews the basis of Fourier theory and other mathematics and statistics principles required to understand MRI physics, signal processing, image reconstruction, and artifacts. Graduate level physics students will likely already have been exposed to most of these concepts, but seeing them applied to the MRI-specific examples presented in the chapter is helpful.

Chapter six considers the classical approach to proton NMR in a voxel, relating the useful analogies of gyroscopic precession and nutation under the influence of gravity. The Bloch equations are presented, and the effect of applying an orthogonal pulsed magnetic field (B1) near the Larmor frequency follows.

Chapter seven -- free induction decay (FID) imaging of a hypothetical 1D patient -- stitches together all of the previously presented concepts into a method for mapping NMR signals along a line, including consideration of the signal induced in a receiver antenna, and the inverse Fourier Transform required to convert k-space data into a spatial NMR map.

Chapters nine and ten dive deeply into the fundamentals of T1 and T2 relaxations, respectively, along with the mechanisms that create anatomic and physiologic contrast between different tissues and molecular environments. Spin-echo (SE) sequences are introduced as a method to separate purely biological T2 dephasing from the effects of magnetic field imperfections. The use of electron-paramagnetic contrast agents, such as gadolinium chelates, is also explained.

And, finally, Chapter 16 wraps up the book with a presentation of MRI future developments that are already underway.

Summary: The authors manage to successfully take the reader on a journey from the discovery and fundamentals of NMR all the way to novel k-space sampling and advanced MR imaging sequences – and their underlying molecular physics – in a manner that is quite thorough, yet should be approachable even to a reader with limited prior MRI knowledge. I believe this will be an excellent source for graduate students and professionals alike, and intend to incorporate it into my own teaching.

An Introduction to MRI for Medical Physicists and Engineers
Anthony Wolbarst and Nathan Yanasak
Hardcover | $120.00

An Introduction to MRI for Medical Physicists and Engineers
Anthony Wolbarst and Nathan Yanasak
eBook | $120.00


Chapter of the Month

An Introduction to MRI for Medical Physicists and Engineers