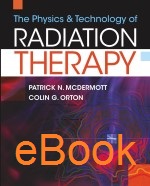 The Physics & Technology of Radiation Therapy

Having taught medical physics courses for several years now, I was curious to learn what advantages Patrick McDermott and Colin Orton's text, The Physics and Technology of Radiation Therapy, offered over the ones I've been using. So when I first picked it up, I immediately searched for a presentation of the Bragg-Gray cavity theory. I didn't find one, nor did I find the usual detailed description of the current algorithms for treatment planning. A little confused, I turned to the introduction, where I discovered my error.

This book breaks from the traditional "straddle the fence" compromise of trying to educate all the personnel in a radiation oncology department. Understandably, most authors produce textbooks that aim to provide broad working knowledge of a particular field to all its members, regardless of their role. However, for medical physics, that leaves behind those with insufficient math or physics backgrounds and makes more work for those who don't need that much detail.

What The Physics and Technology of Radiation Therapy successfully achieves is an accurate and thorough overview of radiation-therapy medical physics at the appropriate technical level for its intended audience-radiation oncologist, radiation-therapy technologists, and medical dosimetrists, not graduate students in medical physics. The authors accomplish that by drawing on years of experience teaching medical physics to radiation oncology residents and by studying the guidelines of professional board exams, which are used to assess role-specific knowledge of medical physics. Orton is a professor emeritus at Wayne State University in Detroit, Michigan, and McDermott is a medical physicist at Beaumont Hospital in Royal Oak, Michigan, a teaching hospital for Wayne State's medical school. In writing their book, the authors compiled material from a medical physics course that had been modified over time to help residents prepare for their exams. To the end, the authors include board-approved guidelines for the material covered on the radiation oncology and radiation-therapy technology exams and point the reader to places where that material is discussed in the book; the medical dosimetry certification board declined to have its outline included.

Starting with topics that most medical physics tests skip over, the first chapter includes the basic, relevant mathematics, including exponents, logarithms, geometry and trigonometry. In the second chapter, the authors review basic physics concepts such as mechanics, electricity and magnetism, relativity, and atomic structure. The coverage in the heart of the book is similar to Faiz Khan's The Physics of Radiation Therapy (Lippincott Williams & Wilkins, 2010) but with varying levels of thoroughness. The book ignores the general "dose determination protocol" (TG-21) of the American Association of Physicist in Medicine but presents AAPM's "clinical dosimetry" protocol (TG-51), with a step-by-step example of the absolute calibration procedure. The Physics and Technology of Radiation Therapy devotes an entire chapter to monitor unit calculation and is more thorough than Khan's book in discussing dose volume histograms. Each chapter concludes with a summary containing all the important points and rules of thumb (there are many), and a section of problem sets with selected answers.

The topics covered-and not covered-in The physics and Technology of Radiation Therapy reveal the authors' intent to emphasize the information that physicians, dosimetrists, and therapists need to know about medical physics. It is an excellent book for any radiation oncology resident, medical dosimetrist, or radiation therapist looking to master concepts in medical physics.