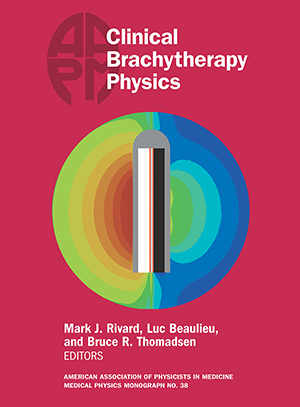 This book was developed for the AAPM 2017 Summer School in Portland, Oregon, held in conjunction with the American Brachytherapy Association. Brachytherapy has been a popular topic for AAPM summer schools, with this marking the third time the subject has been covered (past schools on the topic were held in 1994 and 2005). This book is more than a comprehensive overview of the brachytherapy tools and techniques used in a modern clinic. The book also looks at numerous exciting approaches currently under development. Topics include HDR and LDR brachytherapy for the prostate, general planning and model-based dose calculation algorithms, intensity-modulated brachytherapy, electronic brachytherapy sources and techniques, and brachytherapy advances for treating skin, gynecological, and breast cancer. Some of the promising new techniques covered include focal therapy, the use of 3D printing to augment treatment, advances in needle tracking, in vivo dosimetry, and the use of robotics in brachytherapy.

Mark Rivard has been passionate about clinical brachytherapy physics for the past three decades. He has championed the modality within the AAPM, ABS, ASTRO, and ESTRO through numerous committee and task group appointments. Similarly, the majority of his research programs have focused on brachytherapy physics. His innovations have resulted in several novel devices and methods that position brachytherapy for the 21st century.

Luc Beaulieu is a full professor, Director of the CAMPEP graduate program, and Director of the Cancer Research Centre at Université Laval. He served on the Board of the Canadian Organization of Medical Physicists as President Elect, President, and Past President (2010–2016), was Chair of the TG-186 report, and now leads the AAPM/ESTRO /ABG Working Group on Model-based Dose Calculation Algorithms in Brachytherapy.

Bruce Thomadsen has been a medical physicist since 1970 and a faculty member at the University of Wisconsin since 1975. Professor Thomadsen has specialized in brachytherapy physics and quality and safety in health care. He has been very active in the AAPM and the ABS in numerous leadership roles, including serving as AAPM President-Elect at the time of this book was published. He has been a program director at all three AAPM brachytherapy summer schools.


Chapter of the Month

Chapter 1
How does CT work?